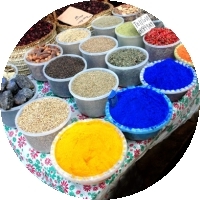 Brussels, 8 June 2016 (EC) – The strategy adopted today is in line with the Commission’s priority to make the EU a stronger global actor. Culture can play a crucial role in strengthening international partnerships.

The ‘Strategy for international cultural relations’ presented by the European Commission and the EU High Representative for Foreign Affairs and Security Policy aims at encouraging cultural cooperation between the EU and its partner countries and promoting a global order based on peace, the rule of law, freedom of expression, mutual understanding and respect for fundamental values.

EU High Representative and Vice-President Federica Mogherini said: “Culture has to be part and parcel of our foreign policy. Culture is a powerful tool to build bridges between people, notably the young, and reinforce mutual understanding. It can also be an engine for economic and social development. As we face common challenges, culture can help all of us, in Europe, Africa, Middle East, Asia, stand together to fight radicalisation and build an alliance of civilisations against those trying to divide us. This is why cultural diplomacy must be at the core of our relationship with today’s world.”

European Commissioner for Education, Culture, Youth and Sport, Tibor Navracsics, said: “Culture is the hidden gem of our foreign policy. It helps to promote dialogue and mutual understanding. Culture is therefore crucial in building long-term relationships with countries across the whole world: it has a great role to play in making the EU a stronger global actor.”

European Commissioner for International Cooperation and Development, Neven Mimica, and Commissioner for European Neighbourhood Policy and Enlargement Negotiations, Johannes Hahn, welcomed the Strategy, in line with the recently adopted 2030 Agenda acknowledging global citizenship, cultural diversity and intercultural dialogue as overarching principles of sustainable development and for the EU’s neighbourhood and enlargement policies.

Culture can play an important role in the EU’s foreign policy. Cultural cooperation counters stereotypes and prejudice by nurturing dialogue, open-mindedness, dignity and mutual respect. Inter-cultural dialogue can help prevent conflicts and foster reconciliation within and between countries. Culture can help respond to global challenges such as the integration of refugees, countering violent radicalisation and the protection of the world’s cultural heritage. Culture can also be a tool to deliver important social and economic benefits both within and outside the EU.

Culture is becoming more and more a vector for economic growth, not only in its traditional forms, but particularly through cultural and creative industries, SMEs and tourism. This strengthens the opinion that synergies with other fields are crucial and that public and private sector and civil society should be more and more involved.

As such, this Communication is in line with the ninth priority outlined by European Commission President Juncker in his 2014 Political Guidelines and reflecting the ambition of the EU’s forthcoming Global Strategy being prepared by the High Representative. The Commission has also announced that it will propose to the European Parliament and the Council of the EU to organise a European Year of Cultural Heritage in 2018.

In the cultural and creative sectors, the EU has already funded many projects such as creative hubs’ networks or the African, Caribbean and Pacific (ACP) Cultures+ programme and the programmes to support cultural governance and promote intercultural dialogue. The Creative Europe programme is also open to neighbourhood and enlargement countries. EU delegations regularly organise cultural diplomacy activities and EU development cooperation has long included culture and heritage in its actions (for example, to restore the Timbuktu manuscripts in Mali). The EU’s support to the Anna Lindh Foundation in the South Mediterranean serves as another good example of how culture will influence the EU’s foreign policy. The Young Arab Voices programme (now enlarged to the EuroMediterranean region), for instance, deepens the dialogue between young leaders and civil society representatives and develop counter-narratives to extremism and violent radicalisation. Another example is EU assistance to protect cultural heritage in Syria, implemented by UNESCO, supporting local stakeholders in monitoring the state of the heritage and in preserving the heritage and countering illicit trafficking. In the Eastern Partnership (EaP), the EaP Culture Programme is supporting the cultural and creative sectors’ contribution to sustainable humanitarian, social and economic development. At the same time, the “Community-Led Urban Strategies in Historic Towns” project seeks to stimulate social and economic development by enhancing cultural heritage in nine historic towns in Armenia, Belarus, Georgia, the Republic of Moldova and Ukraine

To help the EU implement the strategy and create synergies among all EU stakeholders (EU delegations, national cultural institutes and foundations, private and public enterprises, civil society), a Cultural Diplomacy Platform was set up in February 2016, focusing on strategic countries. Operated by a consortium of Member States’ Cultural Institutes and other partners, the Platform will deliver policy advice, facilitate networking, carry out activities with cultural stakeholders and develop training programmes for cultural leadership.

Q&A on the Communication on international cultural relations