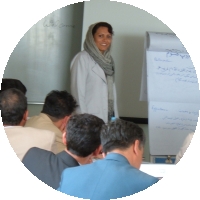 Governance consists of the traditions and institutions by which authority in a country is exercised. This includes the process by which governments are selected, monitored and replaced; the capacity of the government to effectively formulate and implement sound policies; and the respect of citizens and the state for the institutions that govern economic and social interactions among them.

More countries than ever before are working to build democratic governance. Their challenge is to develop institutions and processes that are more responsive to the needs of ordinary citizens, including the poor.
Human rights and democracy are crucial for development.
Both, the United Nations and all donor countries have upheld this concept since the 1990s.
Disregard of human rights, justice or democratic principles has weakened the impact and sustainability of development efforts. As a result, bilateral and international agencies have formulated preconditions for the participation in development programmes. Creating efficient, transparent administrations and supporting decentralisation processes and judicial reforms have therefore become a focus of international development aid.

Karsten Weitzenegger works as Consultant for Human Rights & Governance. As Political Scientist, he graduated from German Development Institute (GDI) and started his career with the United Nations. He became then Technical Advisor and Project Manager for democracy and state reform projects financed by Germany, the European Commission and the EDF, the Inter-American Development Bank and private donors. Karsten carried out several impact evaluations in recent years. He believes that quality of governance does matter for development performance and aid effectiveness. Democracy and human rights actions can contribute directly to people’s wellbeing. Without progress in governance, all other reforms will have limited impact.